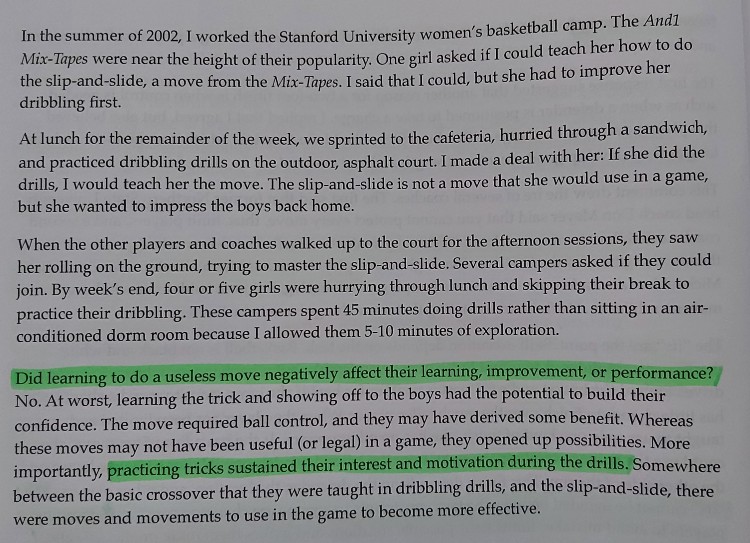 PART I — UNDERSTANDING THE EMOTIONAL ASPECT

“How do you handle a situation where you have two players who are focused on the drill/activity and everyone else is messing around?”

This was a question that was posed to me a couple of days ago after one of our youth team practices (U12). Our coaches wanted to know how to handle a very difficult situation, which unfortunately occurs quite frequently in youth practices around the world.

This discussion that followed allowed me to reflect on a couple of things, which I have shared below.

In reflecting on the question, three follow up questions jump to the forefront of my mind. These are:

These questions help provide context so as to understand how best to approach possible solutions. This post discusses the motivations of the players who come to practice.

Most of the kids are new to the sport, having never played before. To add an even more challenging dynamic to the situation, we have a lot of new volunteers who are new to coaching. Therefore, we are working to create a learning environment that is conducive to the development of both, our coaches and our players.

The reasons behind the numbers increase are vast, but one thing is certain to me. They are all fuelled by emotion.

These are just some of the reasons that we feel contributed towards the influx in the numbers. Each reason presents an interesting challenge though. If the kids are there for the high flying dunks and excitement but are left standing in lines twiddling their thumbs and listening to the coach tell them the importance of a right-left lay-up, it negates the excitement that brought them into the club in the first place.

If kids were forced to show up to practice because their parents made them, then trying to teach the technical details of the game to them is going to cause coaches more issues than solutions.

These are some challenges that coaches go through when designing practice plans and attempting to help the kids become better basketball players. The content may be appropriate and will help the kids develop the skills. However, ignoring the emotional and psychological aspects is often the downfall of the best laid out practice plans.

I dove into this in a previous article — Survival vs Explorative Learning Modes.

Keeping practices fun, exciting and entertaining is a good thing. Sometimes, people mistakenly assume that this means babysitting kids and/or amusing your players, but that’s not it at all. Instead, it is being able to understand the player’s motives and design a practice environment that is conducive to their learning needs.

Having fun practices doesn’t mean that the coach is a bystander. It means creating an environment that allows players to tap into explorative learning modes.

Having fun is exciting, it is interesting, it increases the engagement level of the players, which affects their motivation levels. When players develop higher levels of intrinsic motivation, teaching skills becomes easier, because they want to learn these techniques and skills. When players know that they are in a safe learning environment, where they are allowed to be creative and experiment, they become explorers instead of survivors.

Having fun means that kids will keep exploring, which increases their curiosity and engagement levels. An increase in engagement levels means less time being spent on disciplining and more time meant on teaching.

“The only way to do great work is to love what you do!”

John Wooden, the greatest basketball coach to have ever lived echoed the statements from Steve Jobs saying that the game should be fun and he incorporated those principles within his practices.

So, if practices should be fun, engaging and connect emotionally to the needs of the players, then where should we as coaches start?

It starts by flipping the script — Instead of starting with the building blocks, it starts with creating a spark of inspiration. This is what Video Game and Social Media Companies have long figured out. We need to Learn from the Big Boys, instead of being adds with them. When we do that, we’ll be able to create Wildfires from Sparks.