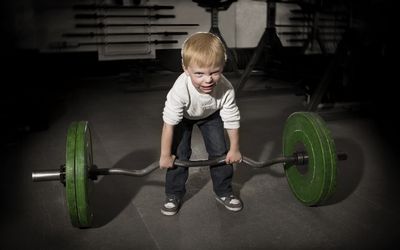 So, is there any truth to this? Or are we just hindering our kids on heresay?

Let’s start first by explaining some of the benefits that are achieved by strength training.

Some other benefits are included in the list below, and whilst it’s not exhaustive, you’ll more than likely hear a number of them if you asked a personal trainer, a fitness instructor, a strength & conditioning coach or even a qualified physician.

The above list provides some extremely good reasons to get kids started on some type of strength training program, but, of course, the major argument behind kids strength training is that it will “stunt their growth!” or “it’s harmful to them”

Here’s the thing – When we’re born, we have more than 300 bones in our bodies and as we grow older, these bones fuse together with cartilage and by the time we get to our twenties (adulthood), we have 206 bones.

Let me expand, the areas in blue in the above picture show cartilage and as the baby grows older, ossification (the process of changing cartilage to bone) takes place. Additionally, blood flows into our bone-forming cells called osteoblasts. These cells then start producing bones, which cover the cartilage and eventually just replaces it completely.

The above process of bone maturation isn’t uniform though, and an article by Eric Cressey points out that, “whilst the proximal humeral growth plate might mature at 19, the distal (down by the elbow) physis is finished between ages 10 and 16.  The proximal and distal radius plates might mature anywhere between 14 and 23.  Meanwhile, the clavicle matures at ages 22-25, and the scapula generally matures by age 22“

Eric Cressey goes on to point out the obvious, that elite athletes competing in college sports aren’t prevented from engaging in strength programs, but rather are encouraged to do so as the increased benefits allow an improvement in performance and reduction in the likelihood of injuries.

The same article points out that children of a young age place excessive stress on their bodies when they sprint or jump (as they are placing 4-6 times their body weight into the ground). These children also carry heavy school bags around or give each other piggy back rides or hang from trees. The excessive forces in these activities are far more likely to give children back pain or injure them, than a controlled and supervised strength training program would.

Alan Stein points out, that “A proper youth training program should involve dynamic flexibility, movement preparation, footwork, strength training, and agility drills” and that “The workouts should be challenging, yet fun and engaging with the goal of building great training habits and a solid foundation of efficient movement“

Effective strength training programs for children will allow them to gain an awareness of their bodies, master their motor skills, improve their co-ordination, balance and reactions. Introducing these programs in from an early age will allow a wider base for them, which will allow their athletic skills to form a higher pyramid.

Long story short; effective strength training programs will help your child rather than hinder his or her growth process.