It’s been a while since I’ve posted anything on here. I’ve been finding it hard to formulate my thoughts into words and put them out there, but enough is enough, I’ll just get on with it. 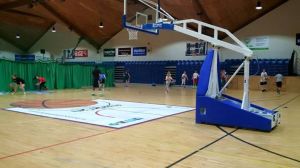 I spent the last year coaching basketball at a high school in Virginia, USA, but I am now back in Dublin, Ireland. It’s good to be back home and have managed to fully adjust to being back at this stage. (I will talk about my coaching experience in the States on a later blog)

The last couple of months have been spent trying to settle back into the country and adjust to this lifestyle; I have also tried to catch up with a lot of coaches and players of mine. I have even managed to communicate with some new coaches, which is excellent. One such coach is Gillian Clarges. Coach Clarges is the director of HoopSkool. If you haven’t heard about them and what they do… stop what you’re doing now and go to their website to check them out.

I have wanted to work with Coach Clarges for a while, but we never managed to do anything until last week, when she volunteered to help out with the Arena National Junior Camp. This got us talking about several different things, one of which was a lack of blog posts from me lately. (This is why I’m writing this now. Apparently, she was the only on reading those posts)

Through talking with Coach Clarges, Hoop Skool and RendBasketball have decided to come together and run a three week program called “The Grind”.

I’m glad that there are coaches out there with a similar mind-set to mine and I look forward to meeting them and getting a chance to work together with them in the future. In the interim, Coach Clarges has helped to recharge my batteries and I am ready to keep doing what I’m doing.

Check out HoopSkool‘s website and facebook pages to gain more insight into what we’ll be doing together.

Until next time … “keep working hard and turn your dreams into reality!”